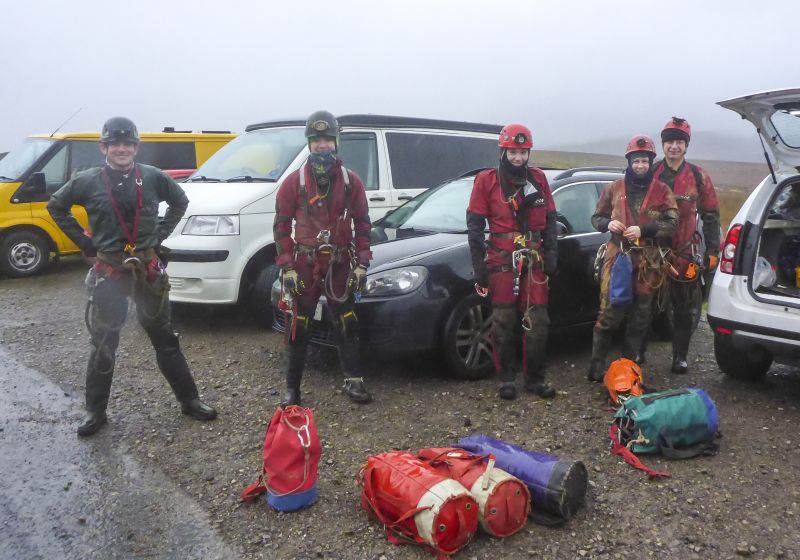 With lockdown over, it was time for some caving again. It’s been months since my last proper northern pothole, and I was dead excited about this.

The planned trip was Lost Johns’ to Notts II, and we had two groups raring to make an exchange. As the week progressed, the forecast deteriorated, and none of us were too familiar with the flood-responsiveness of the Leck Fell Master Cave. Therefore we amended the trip to just a classic Centipede-Dome exchange. I might have done this a million times, but I didn’t care... this was not about the choice of cave, but more about getting back into a cave, seeing friends and reminding myself of why I love caving.

It was a miserable morning, but we met on Leck Fell as planned (two separate groups). Myself, Gary and Chris Curry (Swaledale MRT) headed off down towards Centipede, this being the quickest route we went also armed with ropes for the lower pitches to get these rigged ahead of the second team. The Dome team (Fleur, Pete, Laura, Lee, Adele) caught us up just after we had rigged Battleaxe Traverse and Gary was on his way down Valhalla. Perfect timing! 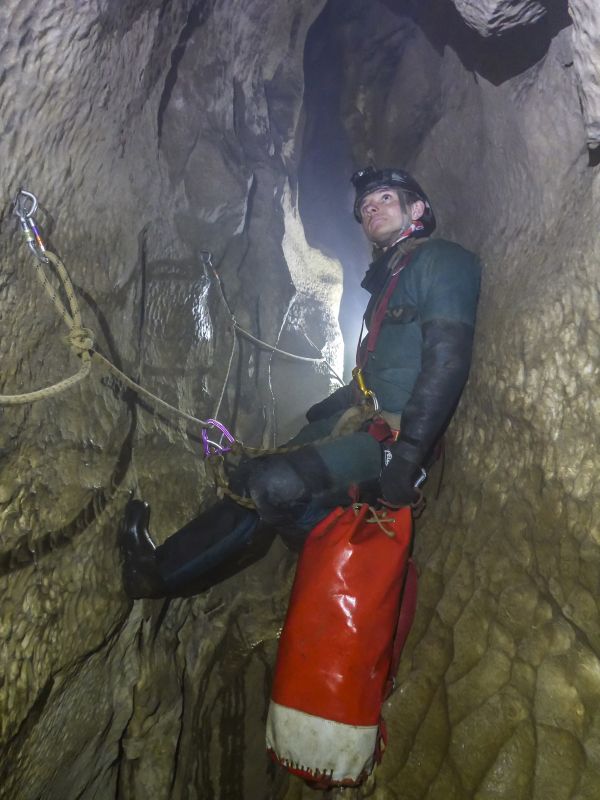 Some discussion ensued (about as coherent as possible over the roar of water below) and it was apparant that some people might be turning around here, and others might come down. Chris and I followed Gary down Valhalla and left the other group to formulate a plan on who was continuing with us and who was going back.

We stomped down to Groundsheet Junction, only to find the Master Cave barely 20cm deep. Clearly the Leck Fell Master Cave can accommodate prolonged wet weather if it is just lots of light rain. The flood debris several metres above us suggest that heavy rain however can produce some interesting pulses, so not hanging around too long seemed sensible. 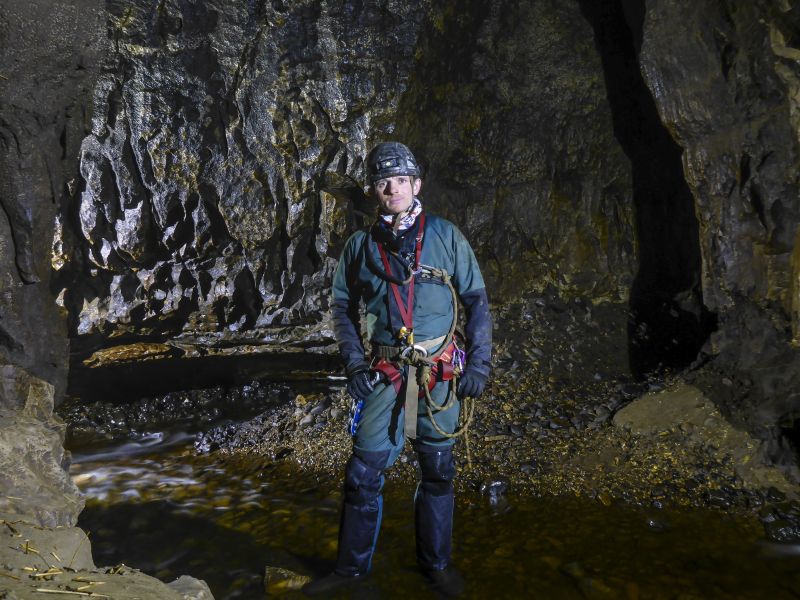 There were no signs of anyone from the other team having come to join, so we decided to go exploring, leaving Gary’s stop descender pointing in our direction of travel. Upstream to Lyle Cavern was fine caving, and Lyle Cavern itself was its usual stunning grandeur. We then went downstream from Groundsheet Junction, which was new territory for me, as I’ve never been that way. We were treated to hundreds of metres of stunning, stomping river, never more than knee-deep. Eventually we heard the rumbling noise of... Rumbling Hole! The water from Rumbling Hole gushed in on the right down a 3m waterchute. 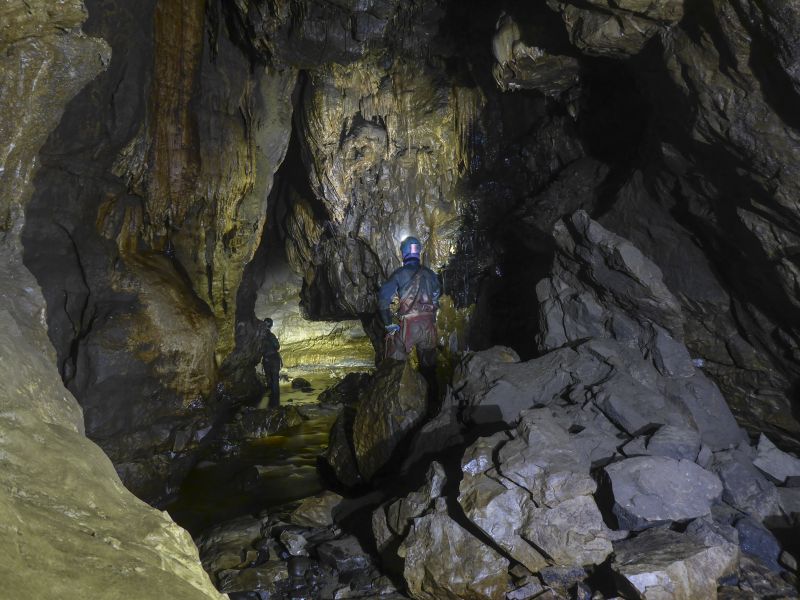 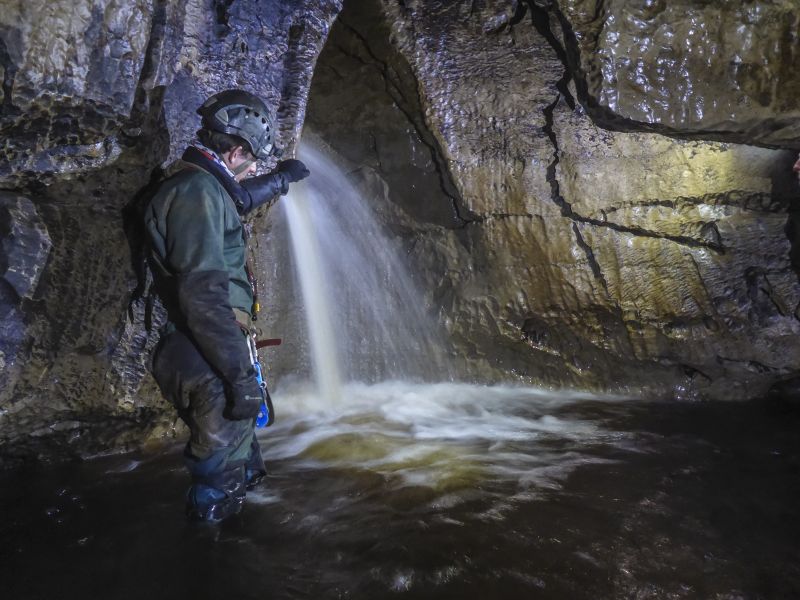 Beyond here, the water in the master cave got deeper and would have meant a more complete wetting (it apparently degenerates to swimming further on, before the Deaths Head Inlet). Therefore, we decided this was quite far enough for today, plus with the weather being unknown, we didn’t want to hang around too long.

We headed out, derigging Dome (the others had gone out Cathedral), thus completing a splendid exchange, albeit with three very heavy bags now between the three of us.

For future reference, the Lost Johns’ to Notts II trip should be passable in reasonably wet conditions, as long as that wetness has derived from sustained light rain and no sudden heavy downpours are likely. We hope to return to complete this trip another time.