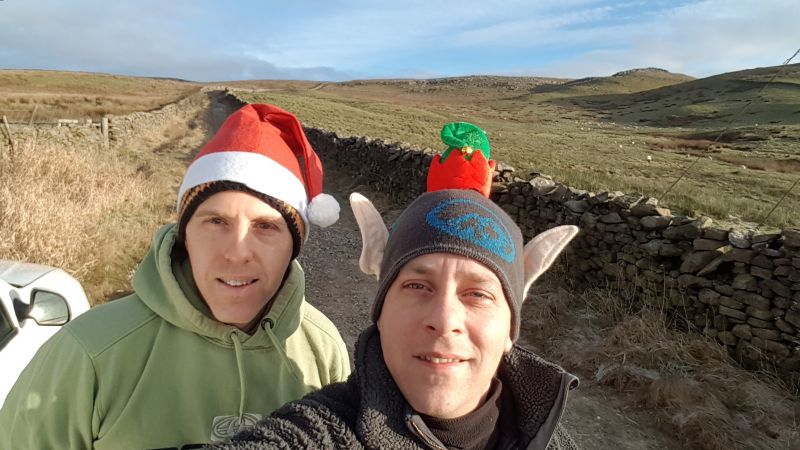 Christmas 2020 is certainly a difficult one and my usual plan of visiting parents was off.

Still, there was little point in sitting around being miserable about this. Therefore, Gary and I decided that a Christmas caving trip should be on the cards to cheer us up and initially a trip with just the two of us to Ireby Fell was planned.

However, as the Christmas restrictions developed, Fleur, Pete and Tash all had their plans similarly dashed and we ended up with a team of five.

Although the original plan was Ireby Fell, with uncertain water levels in the Dales and some recent hydrological changes there, we changed plan to Marble Steps. When I was a student, we would go to Marble Steps at least a couple times a year. However, it seems to have fallen out of favour with lots of clubs now. The last few student clubs I’ve spoken to haven’t even heard of it! This is a shame, as it’s a magnificent pothole, and one which I was extremely happy to revisit.

November and December have been a poor few month for the weather, with very few bright and sunny days, but Christmas day turned out to be the exception. We drove up to the Dales on a crisp and bright Christmas morning and arrived at a beautiful Masongill with great views, and a dry day forecasted (useful as Marble Steps isn’t a place to be in heavy rain).

Tash, Fleur and Pete arrived, and we set off up towards Marble Steps. Any residual concerns about the water levels were quickly alleviated, as the ground was frozen and fairly dry. At the entrance, barely a trickle of water was present at the upper entrance.

Deciding who was going to rig (by Tash Durham): 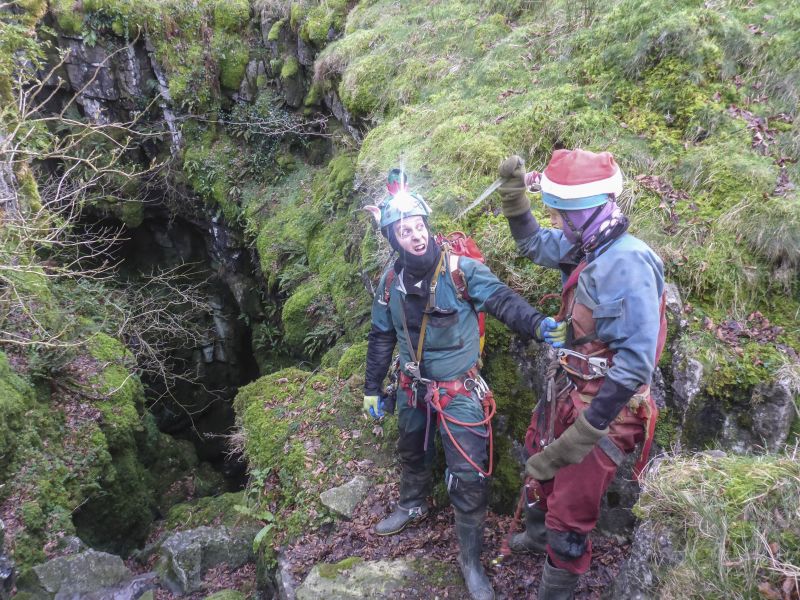 The entrance to Marble Steps really is fantastic – A huge crater strewn with vegetation and icicles, leading down towards the ominous mouth of the pothole. There are two routes down, and we had chosen to take Sidewinder, which is a far more varied and interesting route.

Looking up from the bottom of the entrance gully (by Fleur Loveridge): 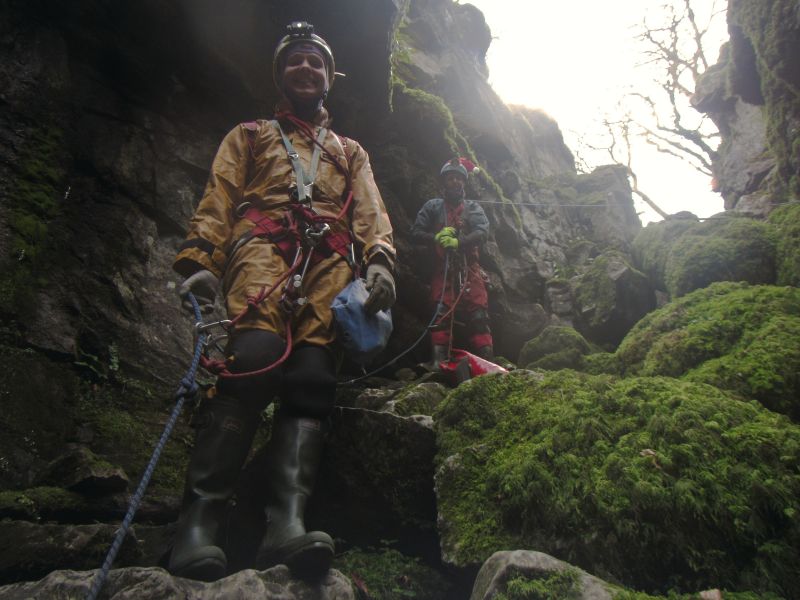 Looking out from the start of Sidewinder route (by Gary Douthwaite): 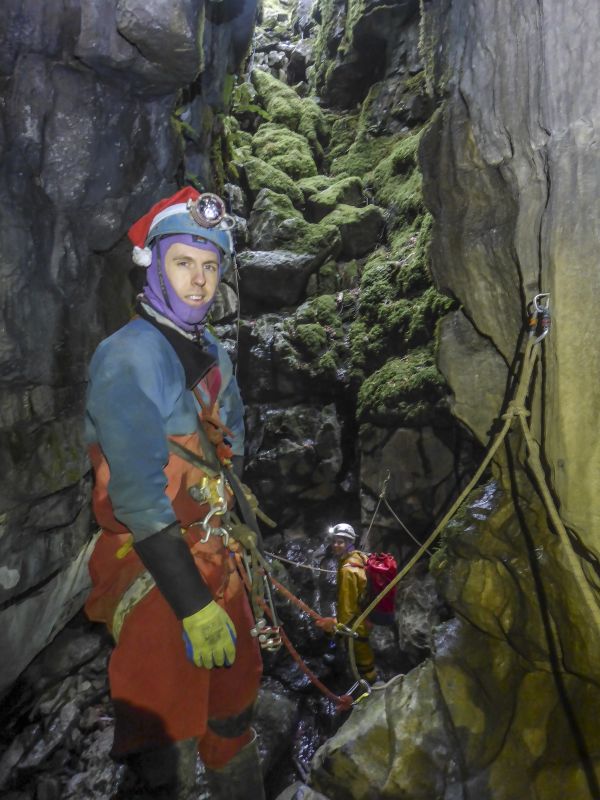 After the handline descent of the shakehole, an exposed traverse took us around the open pothole and up into a passage beyond. Once barely out of daylight we reached a short abseil at the point the upper entrance joins. We abseiled this but it is a quite simple climb. We could have shaved 15m off the rope length and terminated the rigging just out of daylight. Still, that extra 15m of rope carried up the hill equates to an extra chocolate later, right?

A short distance onward we reached the big pitch, where a Y-hang takeoff high up in the passage dropped us through the vadose trench and into a large chamber; rather fine indeed! I hung there for a few moments, skimming my light around the cavern below, to recall why potholing is so bloody fantastic. A rebelay only 4m down gave a clearer hang for a 15m descent to a large buttress of rock, where Gary had swung across and continued the rigging at the far side.

Beyond the buttress of rock, we were able to descend straight to the floor via two deviations. There seemed no need for any further rebelay as suggested by the topo. Our direct route much be exactly where the main waterfall would be in wetter conditions, as we encountered the best part of a tree trunk perched across the passage at the bottom of the pitch.

Maybe 13-14 years ago, I recall a trip to Marble Steps with Gary as part of a YUCPC event, where we had taken the Gully route in the mistaken belief that it was weatherproof. Some heavy rain while we were underground turned the entire Main Chamber into a thundering place, and the exit prussik was almost impassable. Gary had to go up first under a thundering waterfall to reposition a few of the deviations to make it safer. Today however, things were somewhat quieter; almost silent! 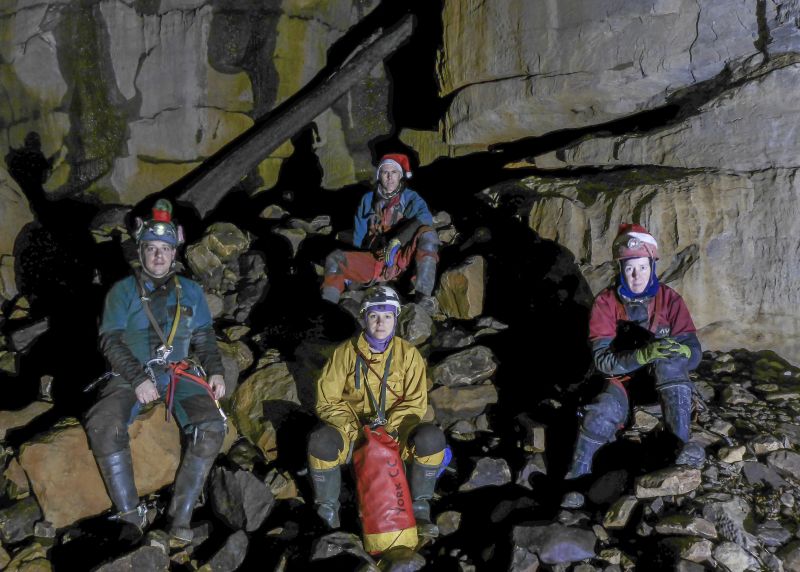 Onwards from there, a short traverse around a chamber dropped into a fine passage (the 240-foot rift) leading to Stink Pot. This was a little narrow at the top but soon opened out and we were then presented with our choice of two routes on, the Intestines or the Ninety. We had packed for the much more pleasant ‘Ninety’ route which involves a traverse over the downward continuation of Stink Pot below the initial pitch, quickly reaching the head of The Ninety pitch. The take-off here is simple enough but Fleur correctly identified that this would be a pain to get off on the upward journey. A long sling attached to the traverse line was left to serve as a foothold for later.

The Ninety proved to be another stunning pitch, a straight hang of 28m in a perfect shaft. It was a little drippy, a few small inlets having joined our route at this point, and not the kind of place I would want to be under wetter conditions.

From the bottom of The Ninety, a further short pitch followed, and a final drop down a drippy chute to the bottom of the cave (on the way back, we found a drier climbable route from further along the Lower Streamway, thus another 15m of rope could have been saved... another chocolate).

The one problem with Marble Steps is how disappointing the Lower Streamway is, with no spacious master cave or admirable sumps... merely a pathetic upstream and downstream sump separated by a minute or two of crawling, a real shame.

With our wraps and chocolate consumed in the confines of the Lower Streamway, we made a quick turnaround. The outward journey was efficient, stopping for a few group photos at the lower Main Chamber. Fleur and Pete departed with a bag, agreeing to see them back at the cars, while Gary, Tash and I derigged the upper half of the cave.

We were out in daylight to stunning views across to Morecambe Bay, and soon enjoying some home-made Christmas cake brought by Tash. 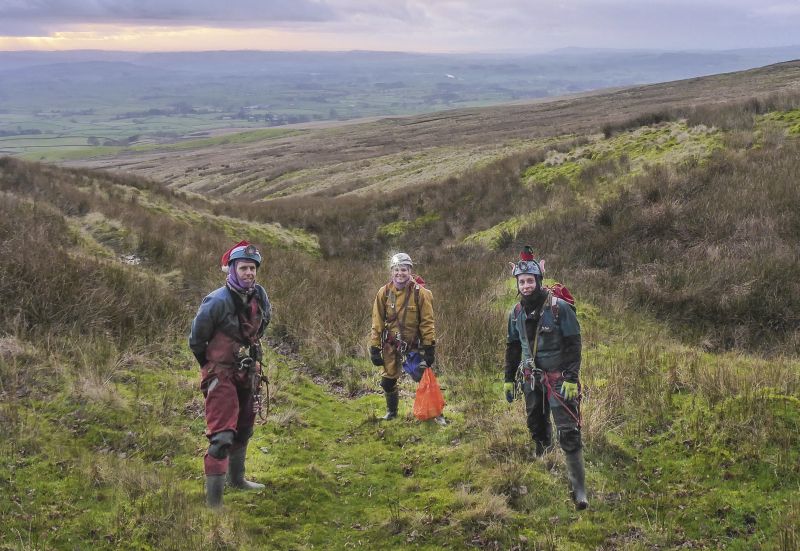