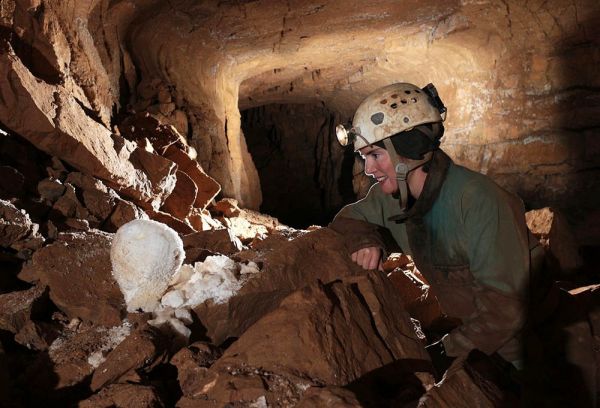 After numerous trips to the far reaches of Ogof Draenen over the last few years (including one to Medusa's Children, one to the Geryon, and one to War of the Worlds and Sandero Luminosa at the opposite end of the cave), we were on the lookout for new places to visit in this excellent system. A tip off from a few club members recommended the Dogleg Complex, a different branch from the end of MS&D. After watching the excellent YouTube videos by The Freems (Youtube name 'Catchpool'), documenting a trip to here, it was clear that this part of Draenen is home to some of the finest formations.

A trip here was a must and so a bank holiday weekend at Whitewalls was promptly arranged.

A reasonably early start for a team of five enthusiasts suggested an efficient day ahead. Unfortunately on arriving at the Draenen car park opposite the Lamb and Fox, myself, Gary and Aileen waited patiently for Rachel and Toby to arrive in Rachel's car. After 30 minutes and no sign of them we were wondering what had happened. With no mobile signal, we gave them another 30 minutes before deciding that we might as well get started and hope they would catch us up (we knew they had recently been as far as MS&D so hopefully knew the way). 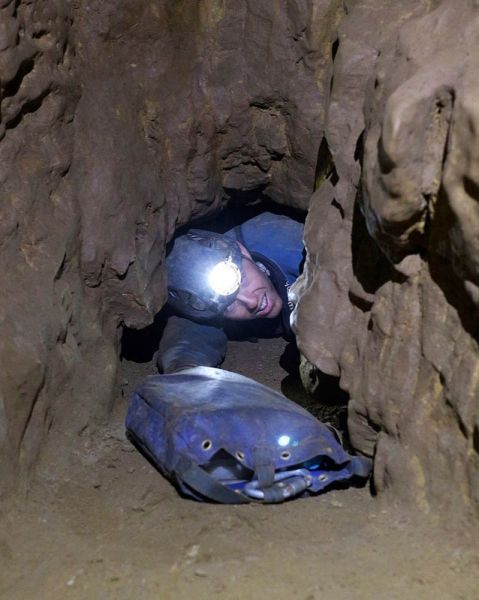 Aileen, Gary and I made quick progress through the entrance series, Beer Challenge, Indiana Highway, Megadrive etc etc, arriving at the Snowball in about two and a half hours - Not bad going! Into Last Sandwich Crawl, and the 30-40 minutes of long but not too hard crawling commenced. It was good to be back at MS&D after a year or so away. We stomped along to the junction where on all previous trips we have headed up towards The Geryon, but this time we headed down to 'Into the Black' down a steep slope of boulders (with a handline at the top). In the chamber at the bottom, a cavernous stream passage disappeared into the darkness (hence the name), but up on the left a steep rubble slope lead up into the Dogleg complex, and then the route was on the right at the top of the slope up yet more scree slopes. This did not look like a place many people had visited!

The Dogleg Complex is a very old, high level fossil complex of joint-driven cave development. It is a three dimensional labyrinth of junctions. Thankfully, Tarquins description which is freely available online (http://www.cavinguk.co.uk/draenen), is excellent. There are a few confusing moments where it is necessary to read ahead considerably to see what bits to ignore and what to follow, and some creative interpretation, but we encountered no major difficulties. Within 30 minutes of entering the Dogleg complex we arrived at our target; a stunning, absolutely magnificent, grotto at the end of an inconspicuous low passage, hidden beyond five minutes of arduous flat-out crawling. 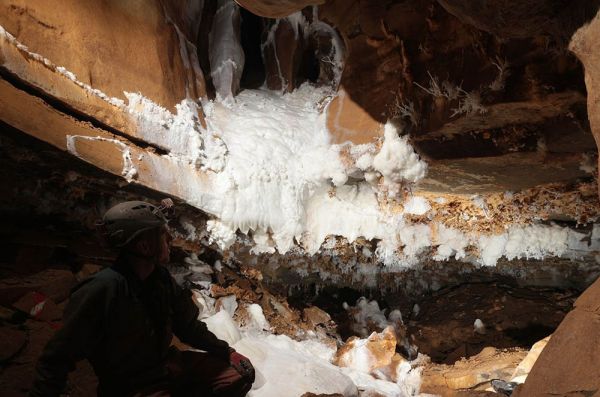 Peering into this grotto from the approach, it is like a fairyland of columns, stalactites, straws and helictites. Stunning! They were in splendid condition, thanks to the difficulty in reaching this location and the fact that this is a dead end so it is not a thoroughfare. We admired this stunning chamber for several minutes and Gary took photos before we moved on.

Next stop was Circus Maximus, where it was nice to be back into more typical Draenen type caverns. There were some very nice stalagmites and straws here. However, the real treat was just beyond Circus Maximus, another dead end with a stunning gallery of flowstone and helictites. Absolutely pristine! 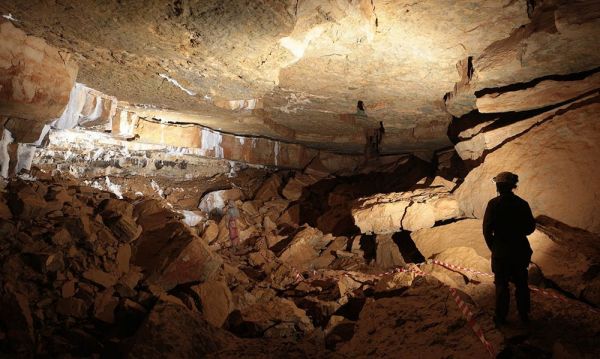 After more photography, we started on our outward journey, stopping only for a brief stomp down the first few hundred metres of the Into The Black Streamway, and exiting the cave at 9pm after about 10 hours underground.

What a superb trip - I thought I'd seen the finest Draenen had to offer before today - But the Dogleg pips the others to take first place.

Arriving out we found a note pinned to the entrance hatch. Rachel's car had a blown out tyre on route to the cave. Very bad luck indeed, but at least they'd got a top notch trip to the Courtisan in Aggie the day before to slightly compensate. It was nonetheless fun telling them how great The Dogleg was! 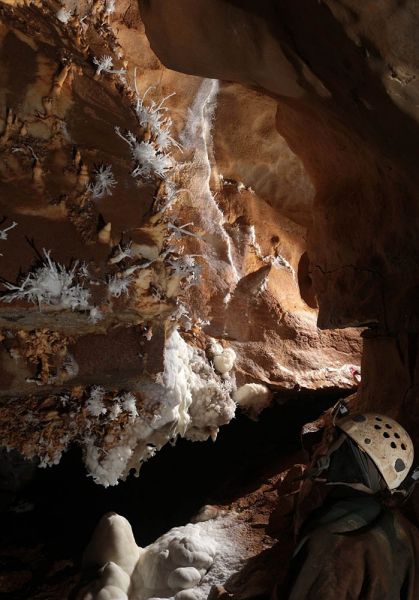