This small Windypit was documented in Northern Caves, and Moorland Caver. It was called Duckendale, although the valley in which it is found is called Ducken Dale.

As part of a slow and gradual process to revisit several of the minor caves of the North York Moors, we attempted to find Duckendale Windypit in 2015. This took two sessions, due to the documented grid reference and description in Northern Caves and Moorland Caber being very wrong. However, after much hacking through undergrowth, it was successfully located.

A ladder, belayed to a tree several metres away allows a 4m drop into the entrance. There is a short, spacious upper passage to explore, and a slither down boulders into a lower passage which descends steeply to a 3m pothole, climbable but with no way on. Total underground time <15 minutes.

Duckendale can be approached from Wass or Wass Bank (car park halfway up), but the finest and flattest approach is by parking by the forestry gate on the A170 at SE 5520 8185, where a southbound path enters the western edge of the woodland. This is not a public footpath but walkers are generally welcomed on most Forestry Commission land in the area. Follow this path, ignoring a track on the left after 150m. After about 1km, the track gradually bends left (eastwards) towards Stanbrook Abbey (a nunnery) and a track on the right drops down into the head of Ducken Dale valley, which can be followed for several hundred metres to reach the cave. The entrance is well hidden half-way up the left side of the shallow valley and requires a machete to get through the waist-height nettles and bracken from Spring to Autumn.

Old clothes, GPS, machete, a helmet/light, a ladder and a 15m rope as a ladder tether is all that is needed. In combination with the forest walk and a pint in a nearby pub afterwards, a visit to Duckendale Windypit is a great day out for anyone interested in speleo-oddments.

As there was no known survey, we returned to survey it on 4th July 2015 to rectify the situation and the survey can downloaded from our publications section. 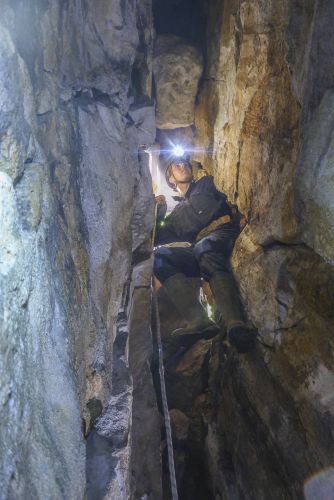