Kirkdale Cave dominates the speleological side of Kirkdale Valley. This 200m+ long cave is by far the longest abandoned phreatic system in the North York Moors. It sits 5m up a disused quarry face next to the road by the ford with Hodge Beck, and was originally discovered by quarrying.

Kirkdale was found to contain bones of all manner of exotic animals, now long since excavated.

Today, Kirkdale Cave involves mostly muddy crawling, with a short round trip near the entrance, often enjoyed by local kids, and small (awkward crawling-sized) passages leading to a muddy duck called The Sphincter. Beyond here, several extensions were made by Scarborough Caving Club in the 1980s-1990s, recorded in our first journal and Descent 139. All these extensions soon choked with mud and suffered from poor air circulation, so were discontinued.

Hodge Beck, which flows down Kirkdale, sinks at several sites upstream of the cave, resurging at Howkeld. The lack of vertical range between sinks and resurgence raises little prospect of any dry cave and it has always been assumed that any flooded passage would be very tight and loose and mostly inaccessible. However, this is a hypothesis that has yet to be tested.

Kirkdale Cave has not been the focus of any work over the past few decades.

Instead, around 2015, we spent some time much further up Kirkdale Valley, where the valley branches right up to Kirkdale Howl, looking along the cliff faces for possible cavelets. Several evenings were had here and a few minor abandoned phreatic discoveries were made and given entertaining names such as Cumode in the Hole and, Wilmot’s Palace. None of these are more than 5-10m long before choking in mud.

A more systematic search of this area could still achieve something worthwhile though and a return at some point, ideally on some fine warm summer evenings, is planned. 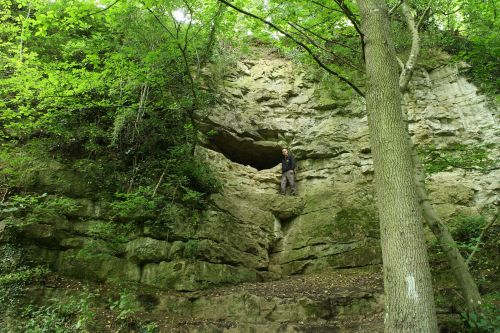