In 1981, divers passed two short sumps at Bogg Hall Rising in the River Dove near Kirkbymoorside, to discover Bogg Hall Cave, with 150m of superb river passage. This was the first active cave to be found in the area. The source of the water was traced to the River Dove, sinking further up the valley. What was more surprising was a trace to Hutton Beck, which also sinks a mile to the north, but in the next valley to the east.

The Hutton Beck sinks were of the greatest interest, as these were of 30m higher altitude than Bogg Hall, thus offering the best potential and vertical range for a cave. Scarborough Caving Club dug at Hutton Beck during the 1990s, although digging was unsuccessful due to the frequent flooding of the beck beyond its upper sink (where the water sinks in settled weather) prematurely terminating their efforts at the downstream sinks. A single flood proved capable of filling even the most well-protected dig.

Several years then passed before future York Caving Club founders Matt Ewles and Gary Douthwaite started ‘The Moors Project’ in June 2007 to reinitiate cave exploration in the area, following a period of dormancy. The project was mainly just a bit of fun, as their fellow cavers from the York University Cave and Pothole Club, were off to Montenegro for an expedition to find new caves. Matt and Gary, who couldn’t take the three weeks off work, joked that they would find more cave closer to home. In the end, they did!

Digging efforts commenced, with a handful of other future York Caving Club members, at Hutton Beck. We were soon joined by Scarborough Caving Club members Richard Wilsdon, Andy Brennan and Carl ‘Chalky’ Thomas. By August 2007, after only five full weekends of digging at a sinkhole in Hutton Beck (500m further down the valley from where the water was sinking in dry conditions), we had broken into Excalibur Pot.

The stories of this digging and the discovery can be found in our first Journal, which is available to buy through our online shop. The story is also recounted in this YouTube video.

Excalibur Pot has an extensive upper level system, comprising mostly north-south rifts connected by small bedding passages, as well as some percolation fed streams, such as the Honey River Series. However, as the passages progress further west under the hillside, they get larger and become more classically mature phreatic, before reaching a balcony dropping 4m into the Main Streamway.

Upstream, this river passage can be followed past numerous excellent formations, and via some large chambers and cascades to within 150m of the surface sinks, beyond which the passage becomes too fractured and small. Downstream, the water meanders under the top of the valley (and passes under the road between Keldholme and Hutton-le-Hole) before being lost into an inaccessible low passage just beyond an area called Primal Scream. The water then takes an 1km journey south to the resurgence at Bogg Hall Rising (passing through some passages discovered 13 years later in Jenga Pot).

The 2007 discoveries brought the Excalibur system to around 1.6 km in passage length, easily the largest cave in the North York Moors, and one of the biggest new cave finds in the United Kingdom so far that decade. The discovery was published in Descent 202, gaining the prestigious front cover photograph.

From 2009-2010, a previously encountered blockage 50m along a small passage (Shit Creek) heading south-east was passed. The passage then continued for 100m, passing several inlets contributing to a combined small stream flowing directly underneath Hutton Beck, south-eastwards down the valley.

This Shit Creek stream is eventually lost into cobbles at the Cobbled Sink, and the dry passage above and beyond continues for another ~100m of mud-choked crawls to another terminal stream, The Paddle, too small to navigate either upstream or downstream, but with a substantial amount of water, much more than Shit Creek. We have yet to identify where this water comes from, goes to and how it gets there.

In 2013, following five years of digging, we broke into Jenga Pot at a prominent sink further down the Hutton Beck valley from Excalibur Pot. The passages explored in Jenga from 2013 to 2014 mostly extended north underneath Hutton Beck, coming extremely close to the southernmost reaches of Shit Creek in Excalibur.

The gap between the two caves became the centre of attention, and while surveying of Jenga was being completed, another entrance, The Secret Dig, was located at a sinkhole mid-way between Excalibur and Jenga that dropped straight into Shit Creek. This allowed the Shit Creek area to be more extensively explored and dug, without the arduous, wet crawling to get there and back that previously prevented a big project.

One dig in Shit Creek was pushed over winter 2014-2015, by excavating a low, and mostly mud-filled section of passage that had previously been overlooked. After a few months of work, this broke through into 150m of open cave passage, running directly beneath Hutton Beck down the valley, and directly under the northern passages of Jenga Pot. A vocal connection was soon made between the two caves, and with only a few weeks of work a physical connection soon followed.

Although they are now one system, we still consider Excalibur Pot and Jenga Pot as two caves, with passages attributed to whichever cave they were discovered from (typically the connection point being the dividing line). Thanks to the 2020 extension to Jenga Pot, the entire system now stands at about 3.7 km in length, with the Excalibur Pot part of the system comprising the greatest share at approximately 2.1 km of passage.

Excalibur Pot is still the North York Moors caving showpiece, and a trip down the original entrance to the Main Streamway and back is a splendid bit of varied caving, with some great stream passage and formations. The cave is on a private shooting estate with no open public rights of access, however, the landowner has been extremely helpful and is willing to allow visitors to the cave providing a few important rules are followed. Therefore, visitors must get in touch with the CNCC permit secretary to arrange access.

Exploration of Excalibur Pot requires full caving equipment (including vertical technique skills for the descent down the entrance pitch), experience, good fitness, an average build or smaller, and an appreciation for the principals of the Minimal Impact Caving Guidelines to help protect the delicate and vulnerable formations, deposits and fauna of the cave.

If you feel you lack the experience and equipment but have the fitness and enthusiasm, please get in touch with us and we might be able to help you out.

There are many unknowns in Excalibur Pot, mainly relating to the destination of the various streams encountered throughout the cave.

The Main Streamway is comprehensively lost beyond Primal Scream, and we do not know the precise route it takes to Bogg Hall Rising. Recent (2020) discoveries in Jenga Pot appear more likely to help us answer this question, as they have intercepted a short section of the Excalibur Pot water approximately 200-300m downstream of where is lost at Primal Scream.

Three independent percolation-fed streams in Excalibur (Honey River, Far Honey River and Bedding Extensions) have all been shown to join Shit Creek. Additionally, water sinking at the Excalibur Pot entrance also flows to Shit Creek. Therefore, Shit Creek drains a substantial amount of water from the eastern side of the cave system. The Shit Creek stream is lost at the Cobbled Sink, but has been relocated at the bottom of a rift a few hundred metres south in Jenga Pot, where the stream is too tight. Furthermore, the separate stream at the end of Shit Creek (The Paddle) carries quite a flow in wet weather, but is also too tight to explore. Work is currently ongoing to understand where these streams go and what route, if any, they take to Bogg Hall Rising. Something remains missing from the picture.

The survey of Excalibur/Jenga is available to buy on paper or download for free from our publications section. 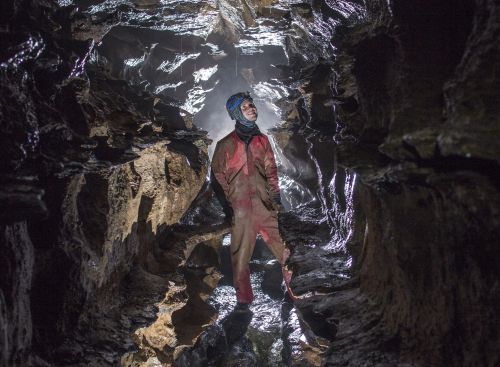 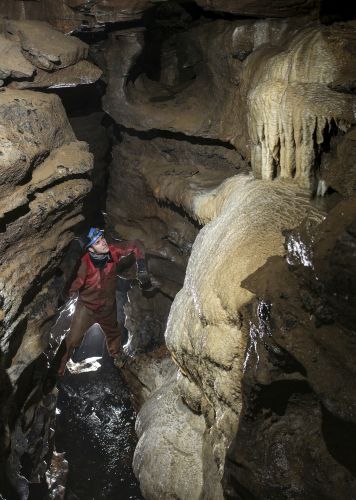 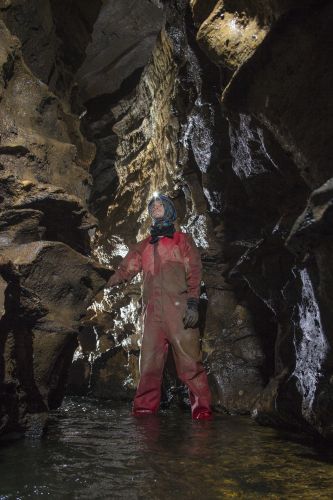 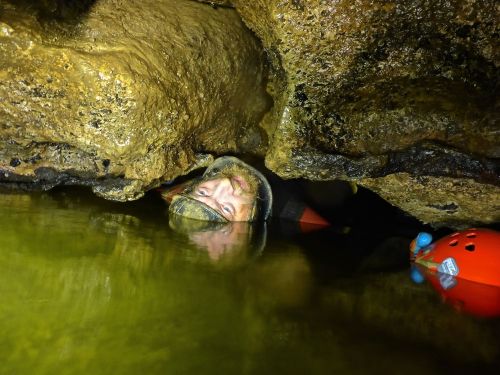 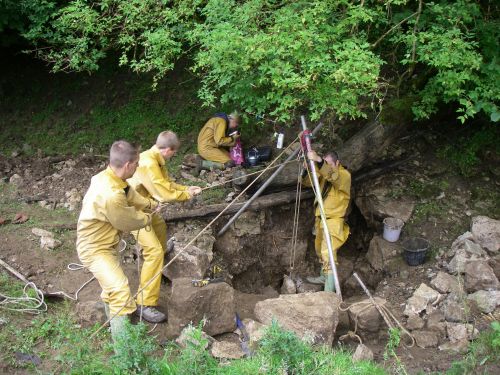 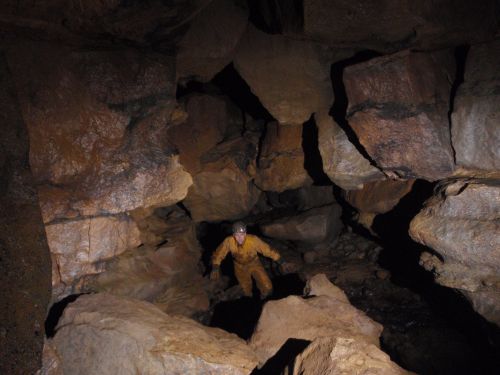